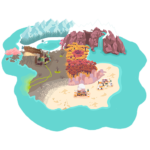 Gaeta is a small but diverse island and it is the homeworld to the four main characters of Retimed.

Season changes are barely recognisable in this place, but the several climate zones compensate and enrich with their outstanding characteristics. The north is occupied by the two towering mountain chains: the freezing Sugar Mountains and the vigorous Strawberry Rocks.

A fruity spring flows from the glaciers of the Strawberry Rocks, directly into the Soda Ocean creating a sparkling slushy lagoon. If the inhabitants of Gaeta would have to pick a single place out of all of the island, to go on vacation, then this “hands down” would be the one!

The Sugar Mountains, on the other hand, provide the Sweet Lake, the biggest refreshment resource next to the sparkling waters of the Soda Ocean.

In the south lies the big Windy Desert, wrapped in it’s dangerous sandstorms. These fierce sandstorms would easily consume the neighbouring Rubber Forest where it not for the Cup Hills that work as an unsurpassable dividing wall.

However, not all habitats where safe from catastrophe: Centuries ago there was a city which was the center of technology and progress in Gaeta. A disastrous chemical accident forced this city into ruins and created an encompassing wasteland for as far as the eye can see. The only thing that remains is a damaged factory complex known as the Industrial District.  ٩(ఠДఠ)۶  “DRAMATIC CHOIR CHANTS!!!”

Luckily this didn’t affect all of Gaeta, as we can see that four of the five big cities still remain: Happy Town, Jollyington, the colony that lies at the foot of the Old Giant in the Rubber Forest and the high-flying Cloud City. 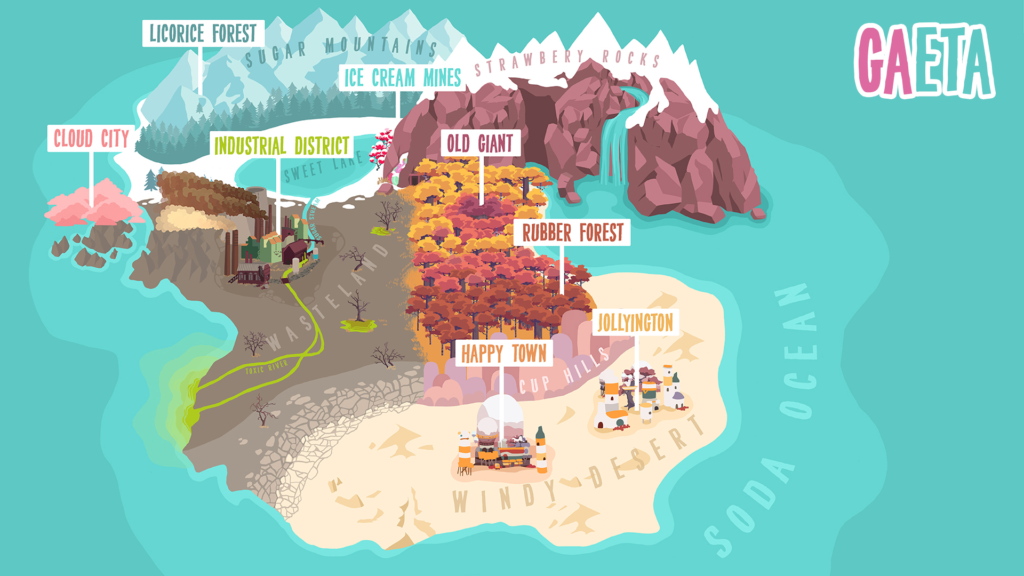